Amazon Prime Video doesn’t have the brand or saturation of Netflix yet but it is rapidly gaining thanks to Amazon’s dominance in online shopping and the quality (if not the quantity) of the shows. People get Prime for the free shipping and a lot of us don’t even think about what’s available in Prime Video.

Well please allow me to direct your attention to two shows that I have enjoyed very much. Shows that will have you directing your smart TV, Roku, game console or connected DVD player toward Amazon the next time you want a good story.

The Man in the High Castle, Season Two 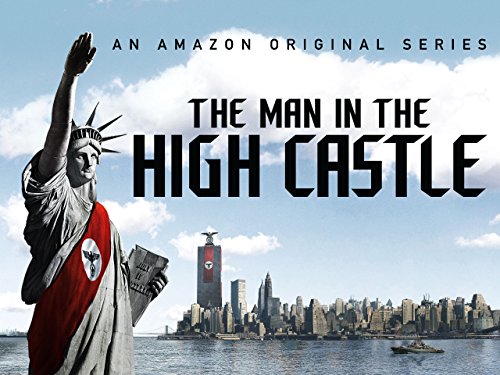 This Amazon original is set in the 1960s, but not the ’60s that you may remember or imagine. The premise of this story is that the USA did not develop the hydrogen bomb or win World War II. Rather, Germany was able to make their own bomb and they ended the war by dropping it on Washington D.C.

In the years following the war, all continental territory of the US (and I believe neighboring countries as well) is under an occupied status. To the west of the Rocky Mountains, the Japanese rule over the people. To the east of the Rockies the Germans control the people. Within the Rockies there is a buffer zone. The Germans and Japanese have a tenuous partnership, and the citizenry is quite literally living in the middle of the way things are and the way they should have been.

There are films that are being passed around the black market. Films that show things that the occupying forces do not want the people to see. And there is a resistance that is trying to get these films to The Man in the High Castle. And nobody seems to know why he would want them or what he would do with him. But it’s important that they arrive. Deathly important.

The story is top notch. The struggle of the characters is felt. You will find yourself loathing and loving the same character at the same time. Season two is coming out soon. Right now would be a great time to watch season one in preparation for it.

The Expanse Season 1 is coming to Amazon Prime on Dec 14th. I watched the season on the SciFy network and it prompted me to buy the book. I know, that’s a bit backwards. But I found that the series is faithful to the book, which makes the nerd in me very happy.

The premise is pretty straightforward. The show happens roughly 200 year in the future. With certain jumps in technology, Earth has begun to explore the solar system. Major leaps in knowledge have been made, but not in understanding or wisdom. Humans are still humans. We have colonized Mars as well as the asteroid belt, and the citizens of Mars have declared independance from Earth. We have also colonized the asteroid belt and begun mining the asteroids for mineral and resource wealth. The belters, likewise, no longer see themselves as citizens of Earth. Three factions, each with their own understandings and misunderstandings, each with a grudge against the other two.

The story is told from the vantage of a police detective on one of the asteroid stations and also from the captain of a small ship. Both found themselves in a mystery that they didn’t ask for and the rabbit hole in each case is much, much deeper than they could have imagined.

Let me be blunt here. If you are still crying that FOX cancelled “Firefly” like I am, you absolutely need to get on board with “The Expanse.” It has been a long time since science fiction this good was presented to us, on the large screen or the small. It is time to invest in the converging stories of “The Expanse.”